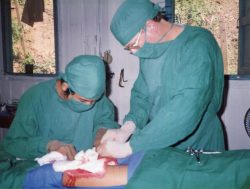 The junta, led by General Ne Win, promptly instituted a barbaric ethnic-cleansing campaign with the goal of enslaving or annihilating the minority hill tribes, numbering millions, who had inhabited the rural mountainous Burmese jungles for centuries. Once the hill tribes were gone, exploitation of their homelands could proceed unimpeded, including clear-cutting of the last remaining old-growth and highly valuable teak forests in Asia, followed by hydraulic mining for gold in the exposed topsoil, thus completing the destruction of the dense virgin forests.

Unfortunately for the junta, the larger hill tribes formed armies themselves and resisted the aggression with successful guerrilla tactics that were somewhat effective for decades. The Karen hill tribe’s army, the KNLA, numbering over 10,000 in 1990, was the largest, and tasked with defending over two million Karens against a 400,000 strong well-equipped Burmese Army. Against these overwhelming odds, with little meaningful outside support, the Karens were in desperate straits when Dr. Mueller first learned of their predicament in 1992.

Told as a first person narrative, Jungle Surgeon covers many dimensions of Dr. Mueller’s adventures ranging from his introduction to Asia through a military tour to the challenges and the rewards of performing major surgery in extreme environments. Background Burmese history and the longstanding civil war that led to over a million internally displaced persons and several hundred thousand refugees in Thai camps is clearly explained. Many other themes are recurrent throughout the text, including details about the day-to-day struggles faced by persecuted ethnic minorities, adventures in tourist Thailand, colorful characters encountered, Dr. Mueller’s use of the art of magic to enrich social experiences and spiritual insights gained on many levels. Dr. Mueller’s interpretation of the remarkable events told in the book reflect his Christian faith and are also consistent with anyone’s faith who accepts the value of mercy and charity combined with the existence of an all-powerful unseen interactive spiritual reality.